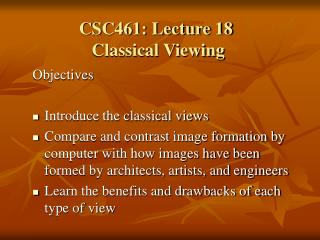 CSC461: Lecture 18 Classical Viewing . Objectives Introduce the classical views Compare and contrast image formation by computer with how images have been formed by architects, artists, and engineers Learn the benefits and drawbacks of each type of view. Classical Viewing. Slicer Training 1: Loading and Viewing Data - . welcome to 3d slicer . goal of this tutorial. guiding you step by step