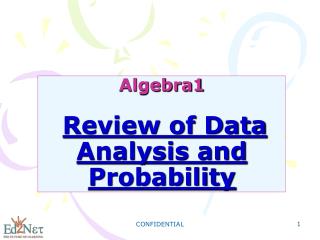 Algebra1 Review of Data Analysis and Probability. Warm Up. Use the circle graph for Exercises 1–3. 1) Which two types of gifts make up just over half of the donated gifts?. 2) Which type of gift represents 1/5 of the total donated gifts?.

Probability &amp; Statistics for P-8 Teachers - . chapter 3 data description. what is next?. now that we know how to

Microarray Data Analysis Using BASE - . you’ve got data!. what was i asking? – remember your experimental design how

Introduction to Probability - . probability is a numerical measure of the likelihood that an event will occur.