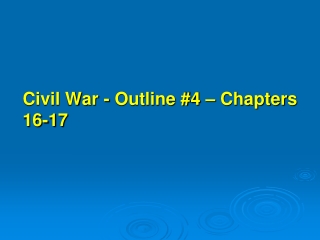 Civil War - Outline #4 – Chapters 16-17. C. Summer of 1861 = both armies marched off with flags flying and drums beating, each expecting to win and t o win quickly (in time they would realized no quick victory was in site). Vocabulary Chapters 9-15 - . copy the words down and skip a line on your paper. we will make vocabulary cards with the

Chapters 22 and Following - . john keyser. remainder of the course. there are six chapters left, and only two lectures.

Russian Revolution and Civil War - . objectives. explain the causes of the march revolution. describe the goals of lenin

The Civil War and Reconstruction - . texas history chapters 15 and 16. issues divide the country. the new republican

The State of the Chapters - . chapter executive directors conference march 11, 2010. overview. what do aap chapters look

Lifting the Veil: The American Standard of Living Since the Civil War: Portions of Two Chapters - . robert j. gordon