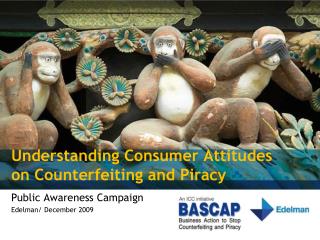 4 th Global Congress on Combating Counterfeiting and Piracy - February 2008 - . the growing problem of the sale of

The Rise of Counterfeiting/Piracy - . intellectual property rights have a considerable economic value. non-respect on

Collaboration in the fight against counterfeiting and piracy in Slovakia - . ing. darina kyliánová president of the