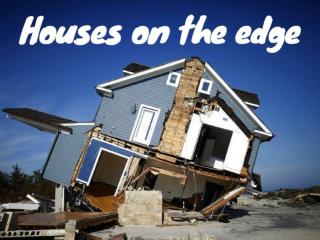 Houses teetering on the brink after being buffeted by natural disasters from typhoons to landslides. Houses On The Move - We are jae donovan and hayley tawhiti, founders of houses on the move. our combined 30 years of

On the Razor’s Edge - . between local and overall needs in knowledge organization. k.u.leuven university library. libis

LIVING ON THE EDGE - . fire, ice and climate change in iceland. a modern country on the arctic circle. iceland has 900

Living on the edge - . terry wrigley newcastle 2017. the myths about poverty not caused by laziness, fecklessness,

On the Cutting Edge: - . pennsylvania was the first state to enact juvenile justice legislation using the restorative

Teaching on the Edge - . edx edge as a platform for library instruction. the course: bio 1b. 1800 students per year lower

Living on the edge - . b anned and challenged books belong in your library. what is intellectual freedom?. the right of

On the Cutting Edge: - A seminar for virtual machine course. mojtaba jafari. on the cutting edge:. thwarting virtual

Oceans on the Edge - What to revise. human activities are degrading and destroying marine ecosystems on a global

LIFE ON THE EDGE - . intro to the plasma membrane. membrane models (from past to present). 1915: membranes isolated from

The Church On The Edge - . what led to the reformation?. pope alexander vi needed cash. he wanted to build a new

THE HOUSES ON MANZANITA BEACH - First on our list is our own earth manzanita house rentals, the homes on manzanita