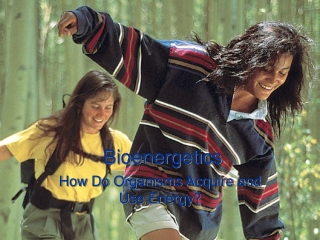 Bioenergetics. How Do Organisms Acquire and Use Energy?. Metabolism. All of the chemical reactions that occur in cells. Organic substances are converted to other organic molecules and energy is transformed. Energy Anything that can do work. Example: move a muscle, make a protein.