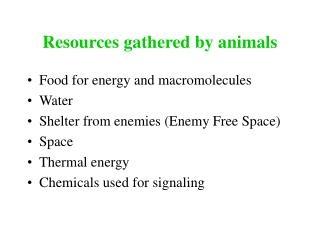 Cree - . by tyler. food. the cree people eat many types of food. cree men hunted and trapped animals for food. some of

Animals - . there are a lot of animals on our planet. they can be. wild . domestic. wild animals are those animals who

Pets and Other Animals - . author: k onevskaya a.n. there are different animals. wild. domestic. in our zoo we have a lot

Environment and Resources - . what is energy?. what do you think of? what is the definition? the ability to do work, or

FOOD CHAINS - . by: jennifer richardson. animals and plants are linked by food chains…. animals get energy and

Gathering the Animals A Goal Project at SWMS - . stephanie jobe lis 692. the need = access. all of the seventh grade and