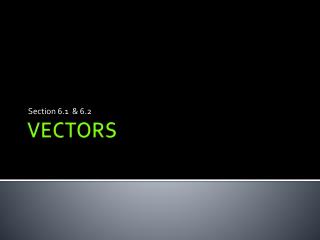 Section 6.1 & 6.2. VECTORS. “still” measurements. “moving” measurements. Force Velocity Acceleration. Temperature Distance Height Area Volume. Vector. A directed line segment (arrow) with its head tale at the origin and its head at the point (a, b)

Vectors - . scalars and vectors. a scalar is a single number that represents a magnitude e.g. distance, mass, speed,

Vectors - . a vector is a quantity or phenomenon that has two independent properties: magnitude and direction. the term

Vectors and Vector Addition - . 1. characteristics of vectors 2. multiplying a vector by a scalar 3. adding vectors

Vectors - . part i. plan for the day…. introduction to vectors definition components of a vector operations with

VECTORS - . the magic of vector math. 2 types of quantities. scalars just a value this value is called a magnitude

Vectors - . objectives. understand the notion of vectors distinguish between points and vectors introduce the concept of

Applications of Vectors - . definition: resultant: the result of two vectors acting on a point at the same time.

Vectors - . vector : a quantity that has both magnitude (size) and direction examples: displacement, velocity,

Vectors - . by the end of this lesson you should know the difference between a scalar and a vector quantity and will

Vectors - . units. vectors and scalars difference between a vector and a scalar quantity addition of vectors –

the Vectors - . vectors and scalars. vectors: a) have both magnitude and direction (ex) driving to palm spring at 70 mph

Vectors - . recall that “vectors” are arrows that represent a vector quantity (magnitude and direction). the length

Forces in Two Dimensions - Chapter. forces in two dimensions. 5. in this chapter you will:. represent vector quantities