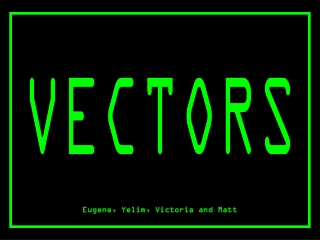 VECTORS. Eugene, Yelim, Victoria and Matt. Contents. Addition and subtraction of vectors Position vectors The scalar Product Vectors equations of a line. Introduction to Vectors (and position vectors). (the little pointy guys). What is a Vector? (Revision). VECTORS - . do you remember the difference between a scalar and a vector?. scalars are quantities which are fully

Vectors - . what is the difference between a vector and a scalar number?. vectors. scalar. both have a magnitude but only

Vectors - Have you ever drawn a treasure map as a child? drawn a map to you home for someone else? ... the length of the

Vectors - . a vector is a quantity that is characterized by both magnitude and direction. vectors are represented by

Vectors - . definitions. scalar – magnitude only vector – magnitude and direction i am traveling at 65 mph – speed

Vectors - . vector : a quantity that has both magnitude (size) and direction examples: displacement, velocity,

Vectors - . there are two kinds of quantities…. scalars are quantities that have magnitude only, such as position speed

Vectors - . addition is commutative. ( vi ) if vector u is multiplied by a scalar k , then the product k u is a

Vectors - A. a. b. vectors. c4. scalar product the scalar (or dot ) product is a way of combining two vectors

Vectors - . a vector measure has both magnitude (size) and direction. the symbol for a vector is a letter with an

Vectors - . vectors or scalars ?. what is a scalar? a physical quantity with magnitude only examples: time,

Vectors - . by the end of this lesson you should know the difference between a scalar and a vector quantity and will

Vectors - . learning objectives scalars versus vectors the components of a vector adding and subtracting vectors unit

Vectors - . 6003 writing vectors. trig form:. y. x. find the trig form of a vector with component form. but remember when

Vectors - . scalars. consider the following objects thermometer beaker battery tester clock what do all these have in