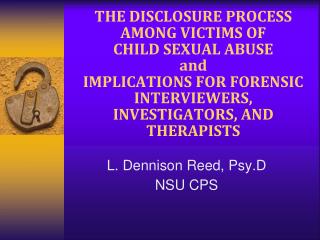 THE DISCLOSURE PROCESS AMONG VICTIMS OF CHILD SEXUAL ABUSE and IMPLICATIONS FOR FORENSIC INTERVIEWERS, INVESTIGATORS, AND THERAPISTS. . L . Dennison Reed, Psy.D NSU CPS. Questions to be addressed in this presentation:.

“Shame On You”: Using Language to Conceal Violence and Blame Victims Linda Coates, Ph.D. - “shame on you”: using

Child Abuse and Neglecting - . law in poland. overall social problem in poland can be separated amongst following

Presenter Disclosure Information (SAMPLE DISCLOSURE SLIDE) - . in compliance with the conflict of interest policies, the

MST for Child Abuse and Neglect: What Do We Know And Where Are We Headed? - . cynthia cupit swenson, ph.d. medical