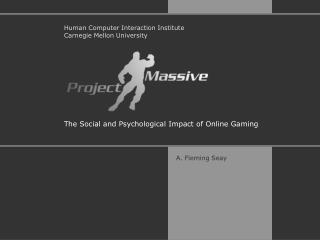 The Social and Psychological Impact of Online Gaming The Social and Psychological Impact of Online Gaming

Online gaming - . jeroen bun s062063. content: what are online games? who plays these games? why do they play? what games

Online Gaming - . by alex albl. what is online gaming?. online gaming is basically playing games over the internet with

The Impact of Psychological Trauma on Development and Learning - . implications for education, social service systems,

The morals, benefits, and psychological impact of fairy tales - . lucy antunez senior project. “if you want your

The Social Impact of Industrialization - . hwh unit 6 chapter 7.3. manchester: one of the first industrialized cities.

The Rise of Online Gaming - . alvaro fermin jose tai. in the beginning…. there was pong. then came…. flash forward to

THE PSYCHOLOGICAL IMPACT OF CHILD SEXUAL ABUSE - . which symptoms or “behavioral indicators” serve as proof that a