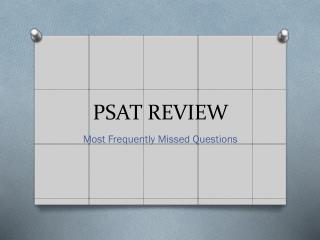 PSAT Strategy Session - . pick up your score report before being seated. how to read the results. how did you score?. if

PSAT – Question of the day - . (b) 8. finding angle measures using clocks. segment and angle addition. the length of a

2013 PSAT Recap/Review - . presented by pvhs school counselors . what and why?. the psat is a standardized test that

PSAT - . tips and tricks by: diego san miguel . tip 1 don’t cram it!. if you plan on studying for the psat try to space

The PSAT - . by: cemil revan. psat structure. strategies for taking the psat. these are a couple of useful strategy that

Understanding PSAT/NMSQT Results - . the psat/nmsqt is cosponsored by the college board and the national merit