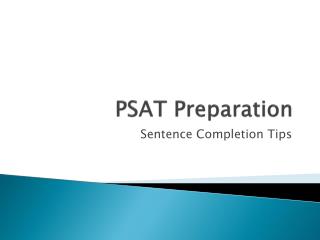 PSAT Preparation. Sentence Completion Tips. Don’t be like Joe!. Joe Bloggs , the average student (who hasn’t had the infinite wisdom of Mr. Ambrose bestowed upon him) would do it this way: Read the sentence five times. Plug in a different option each time. Pick the one that “sounds right.” PSAT - . test strategies to raise your score. prep smarter, score higher—guaranteed or your money back! 1-800-kap-test

PSAT - . the psat can help you in two major ways:. getting scholarship money getting sat practice. benefits of taking the

PSAT - . tips and tricks by: diego san miguel . tip 1 don’t cram it!. if you plan on studying for the psat try to space

Psat Vocab - . abase. v. lower, humiliate i will not abase myself by going to a base with you on the first date. .

PSAT Club - . math – multiple choice. general hints. look at the answer choices before you begin to work on each

The PSAT - . by: cemil revan. psat structure. strategies for taking the psat. these are a couple of useful strategy that