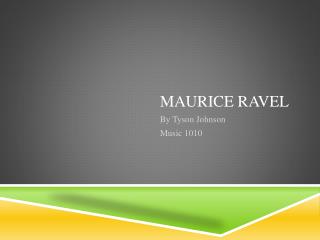 Maurice Ravel. By Tyson Johnson Music 1010. Maurice Ravel was born in France on March 7, 1875 to a Basque mother and a Swiss Father. Maurice Sjerps - Is a professional tennis player in costa rica. maurice sjerps take many steps to save the environment.

Maurice Bejart - . by ashley votta . pair of ballet shoes . this is one of his pieces called bolero, with strong male

My T ravel Journal - . by lina martínez. introduction. for my birthday my parents planned a trip from rabat, morocco,