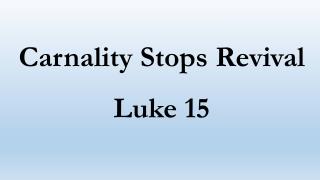 Carnality Stops Revival Luke 15. Luke 15  1 Then all the tax collectors and the sinners drew near to Him to hear Him. 2  And the Pharisees and scribes complained, saying, “This Man receives sinners and eats with them.”. 3  So He spoke this parable to them, saying:. Parable of the Rich Man and Lazarus Luke 16 - . folktale brought out by jesus to teach a lesson. before jesus there was

Luke Baldwin s Vow - Character description. luke baldwinboy who loves dan and will do anything to save himuncle

Advancing The Kingdom - Warning: what you are about to hear will be hazardous to your carnality. the eternal high counsel