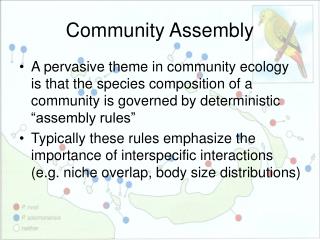 Community Assembly. A pervasive theme in community ecology is that the species composition of a community is governed by deterministic “assembly rules” Typically these rules emphasize the importance of interspecific interactions (e.g. niche overlap, body size distributions). Community Assembly. Community Change - . species turnover succession replacement of one type of community by another nonseasonal directional

Community Structure &amp; Biodiversity - . community. all the populations that live together in a habitat type of

Remembrance Day Assembly - . monday, 9 november 2009. listen to this... this is great. this song was written by mrs