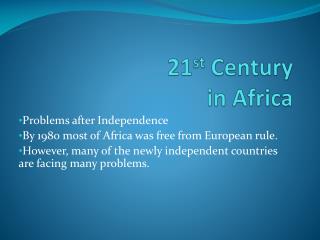 21 st Century in Africa. Problems after Independence By 1980 most of Africa was free from European rule. However, many of the newly independent countries are facing many problems. Key Vocabulary.

Colonialism and the Pan-African Movement - . gps: ss7h1 – the student will analyze continuity and change in africa

Why are some countries rich and others poor? An ensuing 21 st -century paradox - . europe supported by africa and america

REPARATIONS Cyberpower in the 21 st Century, A Path to Freedom for Africans and African Americans - . abdul alkalimat,

African Slave Trade - . gps: ss7h1: the student will analyze continuity and change in africa leading to the 21st century.

CONNECTING AFRICA’S PAST WITH ITS PRESENT - . vocabulary: racism, nationalism, and apartheid standard: the student will

African Americans at Mid-Century - . racism: prejudice based on race. discrimination: unequal treatment based on a

Indigenous People of South Africa in the Early 19 th Century - . map of southern africa. who are these people?. san