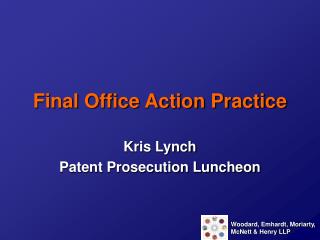 RCE Backlog - . sample : new case inventories at the end of each fiscal quarter from the fourth quarter of 2009 through

On Office Actions - . and how to respond. jonah probell jonah@probell.com not an attorney. rejection. don’t give up.

Modifications to the USPTO Count System Sponsored by the Chartered Institute of Patent Attorneys - . ron harris, the