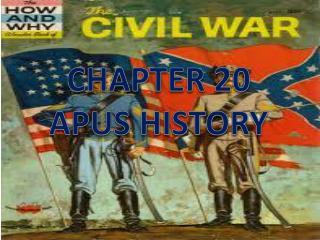 CHAPTER 20 APUS HISTORY. European countries would be pleased to see the US break apart When the South left, they took control of everything they could. April 12, 1861-April 19, 1865. LINCOLN’S INAUGURATION. “Preserve the Union…”. “Hold, occupy, and possess…”.

The Stalemated Seventies - . sara, arleth . issues of the 1968 presidential election . third party candidate nixon was a

Chapter 6: Growth in a Crumbling Empire - . spreading the faith, bringing order to chaos text pages 103-122. a picture of

Magnetism - . ap physics b chapter 20 notes. magnets and magnetic fields--basics. magnets are dipoles , meaning they have