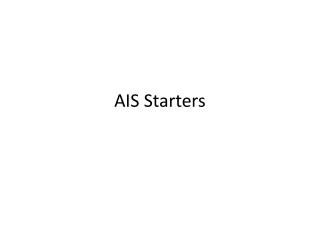 AIS Starters. Starter 2/13/12. Name the Country that explored the Eastern part of the United States during the 16 th Century? Who were the Pilgrims? Where did they settle? Do you know what Xenophobia is? And if so write the definition. Starter 2/14/12. Page 48 IG to AIS

Staying Cool During Summer - Everyone wants to enjoy all the fun things that summer brings, but no one wants to get heat

Lecture 8 - . language, public discourse and critical thinking. previously, we have looked at. fallacies of relevance

The Starter Generator! - Made by mike gershon – mikegershon@hotmail.com. the starter generator!. planning. sources

A MONTH OF STARTERS - . 31 lesson starters for all abilities. rough guide. each task can be used just as a starter, or as

STARTERS: Grammar Review - . we can do this! hang in there!. starter: copy in your own notebook, not your class notebook.