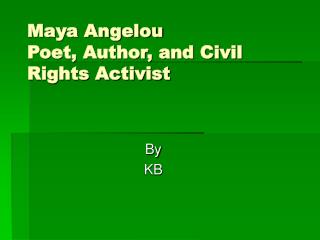 Maya Angelou Poet, Author, and Civil Rights Activist. By KB. Her life. Was born on April 4, 1928 She had 1 brother named Bailey Her parents names were Vivian and Bailey Parents divorced when she was 3 Moved to Stamps, Missouri with her grandmother. life. Life in Stamps wasn’t easy Maya Angelou - . by: kirkland back disque middle school. dr. maya angelou. d r a m a ~and~ the a r t s. biographical

Maya Angelou - . by: juliana. best known for. she is a author and she wrote 5 novels. lifetime. birth:1928 place of birth

Maya Angelou - . by: cassidy murphy and fatou sylla. background information. angelou is a remarkable poet she is a

– Maya Angelou - If you don’t like something, change it. if you can’t change it, change your attitude. don’t

Maya Angelou - . facts about maya angelou. maya angelou was born in st. louis, missouri on april 4 th 1928. she was