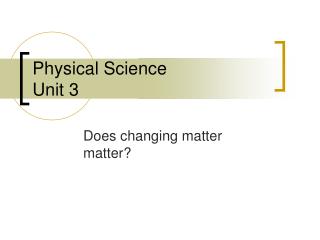 Physical Science Unit 3. Does changing matter matter?. Changing Matter. Tearing Paper. Burning Paper. Physical Changes Alters the form or appearance of a substance but does not make the material into another substance Chemical Changes (aka: chemical reactions)

Unit: Physical Science - . chapter 11: matter and its properties. what is matter?. elements. all things around us are

Physical science unit 2 - . greek thinkers, such as democritus. he called nature’s basic particle an atom, based on the

Unit II Physical Science - . motion and forces. distance vs. displacement. what two changes help you identify that an

Science Unit 3 - . force and motion. 1. identify the situation in which no work is being done. the boy lifts the box

Physical Science 3-7 - . volcanoes. old work to turn in for credit. handout given last friday 12 questions on

Psychology Unit 3 Revision PowerPoint - . criminological psychology. defining the approach. in this section, you need to