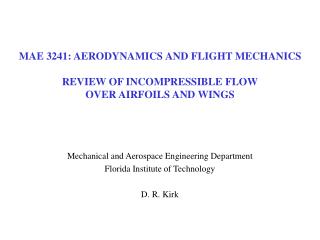 MAE 3241: AERODYNAMICS AND FLIGHT MECHANICS REVIEW OF INCOMPRESSIBLE FLOW OVER AIRFOILS AND WINGS MAE 3241: AERODYNAMICS AND FLIGHT MECHANICS REVIEW OF INCOMPRESSIBLE FLOW OVER AIRFOILS AND WINGS

1. Review the principles of body mechanics - . define the following terms: alignment based on the word line ; a body is

Aerodynamics - . the atmosphere. 78% nitrogen and 21% oxygen remaining 1% consists of other gases primarily argon and

Aerodynamics - . this presentation is not designed as a substitute for adequate and competent flight instruction,