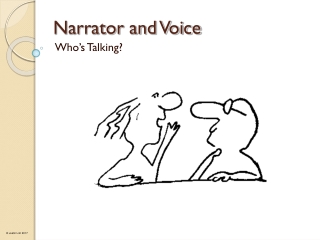 Narrator and Voice. Who’s Talking?. 1. Narrator. Meaning – The narrator is the person telling the story. The story is told from his point of view. Point of view is the way that you see something. 2. First-Person Narrator. How does Ihimaera show that the narrator is terribly conflicted about the events of the day ? - What point is the

100 Years War - . a play and reenactment. intro with a video. who wants to act in the first scene. narrator 1 – a good

Point of View - . the eyes of the narrator . what is pov?. the narrator’s position in relation to the story being

The Narrative Structure - . the narrator. in every movie, the camera is the primary narrator first-person narrator

Point of View and the Narrator - . from where is the story being told?. external narrator ( beowulf ): aware of the story

Point of View - . point of view :. the perspective a story is told from. it establishes the story’s narrator . first

What Do You Need to Know About Narrator and Voice? - . feature menu. first-person narrator omniscient narrator

Point of View - . the angle of vision from which a story is told. to uncover the type of point of view, answer these

Narrator’s Perspective - . point of view. narrator. the one who tells the story characters everyone else in the story

Nick as a Narrator - . first person- gives us his opinions does not know what everybody is thinking- gatsby does tell him

Narration and Voice - . narration. omniscient point of view : the narrator is not a character and is able to tell us