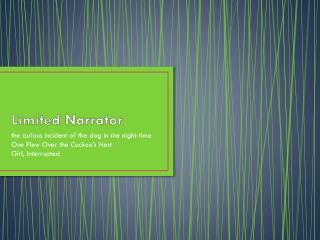 Limited Narrator. t he curious incident of the dog in the night-time One Flew Over the Cuckoo’s Nest Girl, Interrupted . Mark Haddon. English novelist and poet Haddon worked with people with disabilities 2003- won the Witbread Book of the Year Award Narrator - . narrator: anyone who recounts a narrative, either in writing or orally. first person narrator: uses i, can

NARRATOR - . type of clay used for altering the shape of the nose or chin and/or making warts and wounds . nose putty.

Narrator - . the &quot;voice&quot; that speaks or tells a story. some stories are written in a first-person point

NARRATOR - . type of clay used for altering the shape of the nose or chin and/or making warts and wounds. nose putty.

The Narrator - . pegasus press. necessity?. is the narrator necessary? in all narratives?. the narrator is not the

The Narrator - . who’s telling the story?. i can…. i can differentiate between the author and the narrator. i can

Unreliable Narrator - . “i am one of the few honest people that i have ever known.” p59. who says this statement? why

The Unreliable Narrator - . from john hewitt ’ s writing tips. an unreliable narrator is a first-person narrator

Narrator and Voice - . english ii – chapter 3. learning objective. we will be able to explain how the choice of a

Narrator ’ s Perspective - . &amp; point of view. what ’ s the difference?. point of view : focuses on who who is

Narrator and Voice - . who’s talking?. 1. narrator. meaning – the narrator is the person telling the story. the

Enter: the Narrator - . 30 january 2014. the illusion of representation and simplicity. mimesis and diegesis ; imitation

The Sketchy Narrator - . unreliability and effacement in shirley jackson’s the haunting of hill house. #1: don’t be a