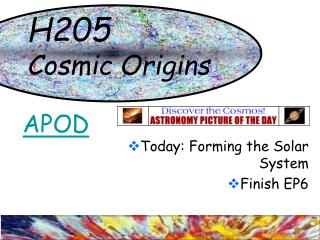 Modeling Cosmic Dust: - . how to use optical &quot;constants&quot;. the life-cycle of stardust. dust and energy

Chapter 2 The origins of the sustainability problem - . learning objectives. in this chapter you will learn how economic

Ground Detectors for the Study of Cosmic Ray Showers - . luis villaseñor-umsnh in coll. with the group of humberto

The Ecology of Human Origins - (human paleontology, archeology, paleoclimatology) who are we, ecologically speaking?

Beyond Consciousness to Cosmos: Beyond Relativity and Quantum Theory to Cosmic Theory - . why we have no physical