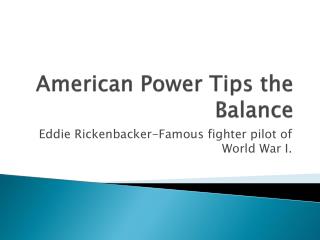 American Power Tips the Balance. Eddie Rickenbacker-Famous fighter pilot of World War I. . America Mobilizes. Before WWI – 200,000 men were in military service when war was declared. Needed to make an Army. Raising an Army Balance of Power - Quaestio : how and against whom did monarchs compete for power in medieval europe? nunc agenda :

BALANCE OF POWER - . first, let’s discuss the term – “balance of power”. what do you think that might mean? can

Changing the balance of power - . wednesday 18 april. how this relates to the other topics. we have already learnt about

Balance of Power - Quaestio : how did the power of monarchs fluctuate in medieval england? nunc agenda: finish group

Power Balance wristband - . you need one!. what’s up. i’m the director of the fall semester of the intro bio labs