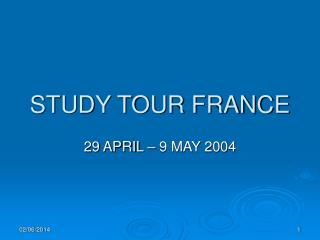 STUDY TOUR FRANCE. 29 APRIL – 9 MAY 2004. INDEX . TEAM DO’S AND DONTS FRENCH GOVERNMENT SYTEM WHAT DID WE DO. REPORT AT THE END PLACES ATTENDED COLLAGE OF SOME PICTURES. Always be on time. Be sure of the outcome of the tour Ask as much questions as possible. Tour de France - . by flower558. the tour de france is a bike race. it is always held in france. it occasionally passes

My Tour of France - . this is a collection of photos from my experience of the 2007 le tour de france. the article from

GAEP Study Tour - . an overview of the ombudsman for workplace safety may 16, 2007. c ontext: the ontario workplace