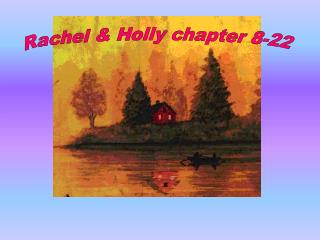 Rachel & Holly chapter 8-22. Chapter 8. Chapter 8 In chapter 8 Winnie meets Jesse and falls in love but is then kidnapped so the Tucks can keep The secret of the spring. Chapter 9. Tuck Everlasting Chapter 9

Chapter 8 Valuation Exhibits October 22, 2000 - .  2000 the marketspace center, monitor group do not reproduce do not

Chapter 22 - . reflection and refraction of light. dual nature of light. experiments can be devised that will display

Holly - . by: ian labarge and james mayfield. francis says:. we see holly everywhere this time of year, but did you know

CHAPTER 22 - . the new deal. objectives. analyze the impact franklin d. roosevelt had on the american people after

Chapter 22 - . reaction of benzene and its derivatives. reactions of benzene. substitution at a ring carbon. contrast to