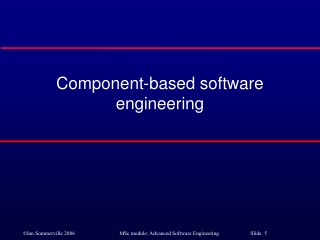 Component-Based Software Engineering - . tip this chapter will present a complete picture of how to develop software

Software Engineering - . the material is this presentation is based on the following references and other internet

Component-based software engineering 1 - . objectives. to explain that cbse is concerned with developing standardised

Component Based Development - . r&amp;d sdm 1 2010 theo schouten. content. component based development, what is it

Software Metrics - . engineering. engineering is a discipline based on quantitative approaches all branches of