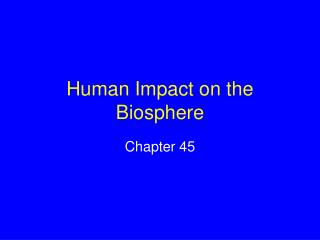 Human Impact on the Biosphere Human Impact on the Biosphere. Chapter 45. Human Impacts. Humans are using energy and altering the environment at astonishing rates We are altering natural processes before we even understand them. Developing vs. Developed.

Human Impact on the Biosphere

Human-Computer Interaction - . definition of hci. human-computer interaction is a discipline concerned with the design ,

A pod of bottlenose dolphins living in a specific region can be identified as which level of organization? A. Biosphere

From impact factor to influence? - . kamran abbasi acting editor, bmj. what i will talk about. what is impact factor?