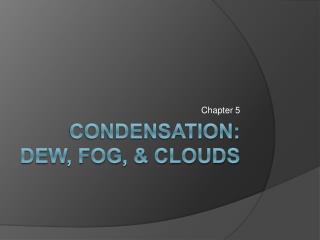 Chapter 5. Condensation: DEW, Fog, & clouds. The Formation of Dew & Frost. Dew forms on objects near the ground surface when they cool below the dew point temperature. More likely on clear nights due to increased radiative cooling

Conditions For Fog Formation: - . given a sufficient number of condensation nuclei, the ideal condition for fog formation

Condensation - . condensation. atmospheric moisture has its most direct influence on land only when it is in its

Latent Heat, Dew, Frost and Fog - . atmospheric circulations move moisture northward. where some of it condenses in the

FOG - . fog is a cloud (usually stratus) that is in contact with the ground. relatively stable air ie. shallow lapse rate Major Forms of Condensation - . cloud fog frost and dew. what are the forms of condensation?. differences between forms