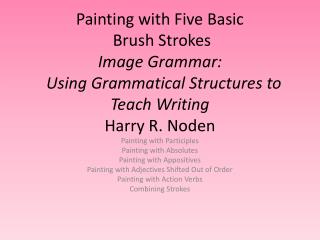 Painting with Appositives - . look at the following two images and the sentences which accompany them. you are to

Painting with PARTICIPLES - . participle: a form of a verb that acts as an adjective can be past tense (-ed) or present

Painting with Participles - . many authors say that writers need to show a story rather than tell a story—or paint a

Brush strokes in Writing: Painting with Absolutes - Please grab a pink warm up and glue it ¼ of the way down page 9 of

Painting with Light - . x. looking back: self portrait found kodak-moment at the capital hill group health cooperative. i

Painting with Words - . poetry. structure in poetry. form- the structure of the writing (what it looks like on the page)

Painting With Light - A. ssignment gr. 11. painting with light. print from negative by samantha beauchamp. a. ssignment

Henri Matisse Painting with Scissors - . henri matisse. one of the most influential artists of the 20 th century artist,

Painting With Pastels in 2018 - You may use pastels quickly over a large place. this gives an professional the