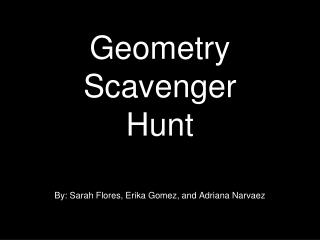 Geometry Scavenger Hunt By: Sarah Flores, Erika Gomez, and Adriana Narvaez. Point. Point, is represented by a dot, has location but not size. The crystal in the middle, has a man made tip at the end, representing a point. The end of the leaf has a tip, represents a natural point. A. B. C.

Geometry EOC Item Specifications - . the geometry eoc is computer-based. sample item 1. lessons 2-2 and 2-3. which of the

What could we have provided or done differently? - . a closer look at students’ suggestions for campus services. ashley

Geometry - . concerned with questions of shape, size, relative position of figures, and the properties of space. geometry