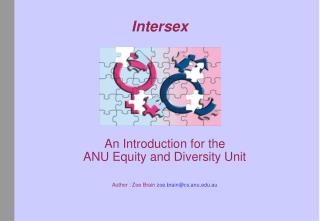 An Introduction for the ANU Equity and Diversity Unit Author : Zoe Brain zoe.brain@cs.anu.edu.au. Intersex. What is Intersex?. These are real photos from a dating website. Were they born male or female? - . martha or arthur?. boy or girl? the

For the Beginner Amelie Schreiber - . what intersex is not. it is not “hermaphroditism,” as this is a complete set of

GENDER IDENTITY AND STRATIFICATION - . do now:. in your notebooks, answer the question: is gender something we are born