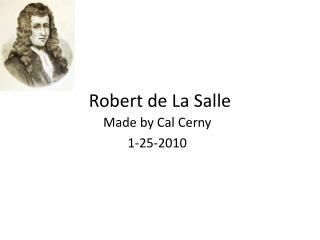 Robert La Salle - . by harley lay, and travis reynolds. reasons. some of the reasons robert sailed to the gulf was for

Robert La Salle - . by urich, ryan. f a c t s. he was 22 years old he wants to concer and explore. he traveled down the

Robert de La Salle by: Hannah - . motive and sponsor. his sponsor was france. his motive to be wealthy and to clam land.