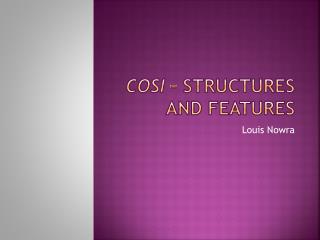 Cosi – structures and features. Louis Nowra. Characters contribute to dramatic effect. Doug’s deliberate antagonising of other’s and his pyromania Zac – has abrupt entrances and exits They both have clown-like roles – but Doug is much more menacing. .

CHAPTER 14: POLYMER STRUCTURES - . issues to address. • what are the basic microstructural features ?. • how are

Section 11.3 Features structures in the Grammar ─ Jin Wang - . how to specify a way to integrate feature structures and

VOLCANIC STRUCTURES Introduction - Two aspects of volcanism are relevant to the study of geomorphology: 1. there are a