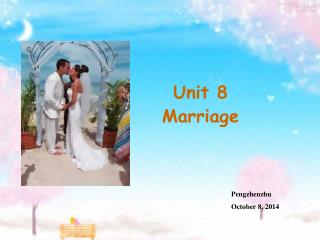 Unit 8 Marriage. Pengzhenzhu. October 8, 2014. Ⅰ Lead-in What is marriage? The definition of marriage depends on not only the historical period, but also on the geographical location and the cultural traditions of the individuals involved in the marriage relationship.