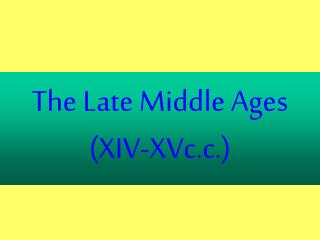 The Late Middle Ages (XIV-XVc.c.). Dealing with the Celts: Wales and Ireland. In 1284 King Edward I united West Wales with England and made his son Prince of Wales to demonstrate English dominance The Norman nobles and Irish chiefs became almost completely independent from the English Crown.

The Middle Ages - . decline of roman empire- germanic barbarians took over and everything fell apart. periodization.

The Late Middle Ages - . william the conqueror. a. cousin to the king of england 1. he was the duke of normandy, meaning

The Middle Ages - . significant events. the magna carta. the black death. now………. what can you recall of the middle

The Middle Ages in Western Europe - . began with the fall of rome and lasted until the 15 th century two general periods:

Architecture of Monotheism in Late Antiquity and the Early Middle Ages: - Jewish and early christian architecture.

The Middle Ages in Western Europe - . began with the fall of rome and lasted until the 15 th century two general periods:

The High Middle Ages - . when people discuss “the dark ages,” they typically mean the low middle ages. (that means