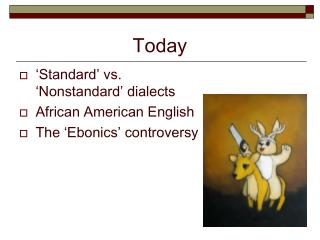 Today. ‘Standard’ vs. ‘Nonstandard’ dialects African American English The ‘Ebonics’ controversy. Summary. Daniels: “Everyone speaks a dialect.” “Speakers of all languages employ a range of styles and a set of subdialects or jargons.” TODAY - . review leads the body of an article the inverted pyramid assessment: “picking up the pieces” activity

TODAY - . nutrition transition theory: how does this all come together? food futures: will there be enough food for the

Today - . today is a silent work day. you need to have the following done before leaving: read silently for 20 minutes

Today Is The Day - . i'm casting my cares aside i'm leaving my past behind i'm setting my heart and mind o n you jesus.

Today - Governor. lab 5. today. how is the speed of the engine regulated?. two types of throttle control:. manual

Today: - . take out note cards copy down notes on sonnets on the next 3 slides. sonnets. origins of the sonnet:

5 Reasons Now Is Best Time To Become An Entrepreneur - Entrepreneurship is in the air. 54% of millennials either want to