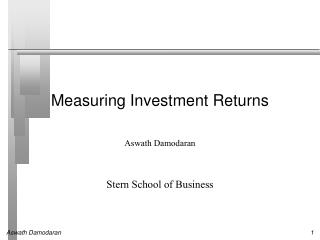 Risk and Return: Past and Prologue - . 5. bodie, kane, and marcus essentials of investments, 9th edition. 5.1 rates of

Risk-Return Trade-off - . s.vasantha. there is a fundamental link between an investment’s return and its risk.

Measuring Real Value: A DIY guide to social return on investment - . lisa sanfilippo q &amp; a with eilís lawlor and

Rate of Return - . definition. the rate of return (ror) is: a percentage (or interest rate) that describes the merit of

RETURN ON MARKETING INVESTMENT - . june 2012. a bit about me . media planner digital media strategy advertising . my

Toward an Ontology for Measuring Systems Engineering Return on Investment - . advancing the knowledge of systems