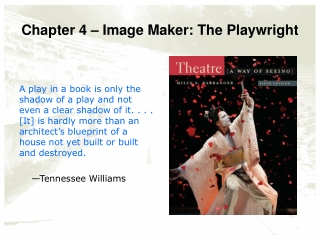 Chapter 4 – Image Maker: The Playwright. A play in a book is only the shadow of a play and not even a clear shadow of it. . . . [It] is hardly more than an architect’s blueprint of a house not yet built or built and destroyed. —Tennessee Williams. Chapter Summary. Chapter 14 Processing the Latent Image - . the processing of the latent image produces the manifest image. the exposed

Game Maker 8.1 - . tutorial assistance. first create a sprite! how? what is a sprite? just an image! found where ?

A Doll’s House Background and Playwright Info - . about the playwright—henrik ibsen. norway—place it in geography

Who’s Who in Theatre - . the playwright. a person who writes plays a playwright writes the story and dialogue of a

The Playwright - . responsibilities and analysis. i. why write a play?. playwright – the person who writes a play. ii.