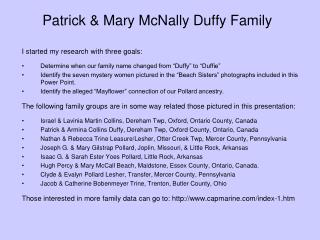 Patrick & Mary McNally Duffy Family. I started my research with three goals: Determine when our family name changed from “Duffy” to “Duffie” Identify the seven mystery women pictured in the “Beach Sisters” photographs included in this Power Point. Salome – Carol Ann Duffy - . never again! i needed to clean up my act, get fitter, cut out the booze and the fags and

A talk with 3 titles By Patrick Prosser - . research … how not to do it. lds revisited (aka chinese whispers). yet

MARY IN THE GOSPELS - . the reader of the gospels is at first surprised to find so little about mary; but this obscurity