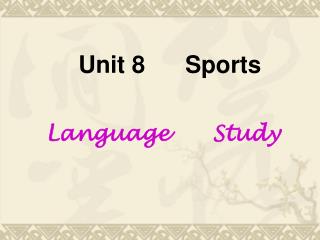 Unit 8 Sports - . warming up &amp; speaking. our sports meeting. -the ? place we got -the sports star belonged to ?.

Unit 8 Sports - . tang chenghui. do you know some important sports games or sports stars of each kind of sports?.

Unit 8 Sports - . warming up &amp; speaking. designer: katherine huang. once you see this picture, what will you

Unit Seven Sports - . objectives of this unit 1. get acquainted with the words for different sorts of sports. 2. learn to

Unit 8 - Part a: exercise. 1.q: why did the man say sorry?because he dialed the wrong number.2. q: why did linda say

Unit 8 - . punishments and investigations. arrest. an arrest takes place when a person suspected of a crime is taken

Unit 8 - . learning a foreign language. revision. find a new word in this unit to match the definition given. awful. 1.

Unit 8 - . introduced two of the three key aspects in any programming language structuring of data statements and

Unit 8 - Book p.14. unit 8. we can make things. we love to make things whenever we can. we collect odds and ends like the