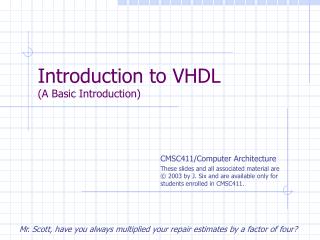 Introduction to VHDL (A Basic Introduction). Mr. Scott, have you always multiplied your repair estimates by a factor of four? . Use and Distribution Notice. Possession of any of these files implies understanding and agreement to this policy.

An Introduction to Structural Style Coding in VHDL - . structural style: from digital circuit to vhdl. for structural Introduction To VHDL for Combinational Logic - . vhdl is a language used for simulation and synthesis of digital logic. a

“Jeopardy” - . type the topic here. topic 1: 1 point. the philosophy that has shaped the chinese political system