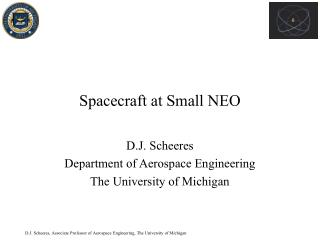 Spacecraft at Small NEO. D.J. Scheeres Department of Aerospace Engineering The University of Michigan. The Asteroid Dynamical Environment is …. one of the most perturbed environments found in the solar system

Scaffolding Children’s Learning at Small-Group Time - . objectives. participants will be able to: state the rationale

A Small Dose of ™ Lead - Converging issues: lead, ethics, and our children’s potential or should the cdc lower the

Small Groups: Wave of the Future - . how to organize and run small groups. hi. my name is pen cil, and i’ll be your