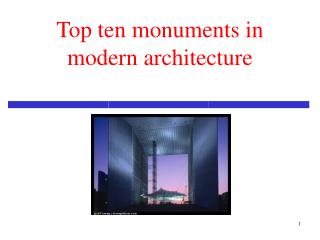 The Egyptian Empire - . mr. roe 6 th grade social studies. review. you learned that egyptians were ruled by all powerful

Modern Architecture in the U.S.A. Immigration and Consolidation - . mies van der rohe technology is rooted in the past.

The Arch of Hadrian, Broocks Wilson - . hadrian as a precursor to da vinci. hadrian originally made a name for himself as

Egyptian Tourist Attractions - . visit a country live, and immersed in culture. buildings and civilizations that have