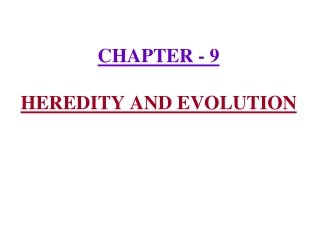 CHAPTER - 9 HEREDITY AND EVOLUTION. 1a) Heredity :-. The transfer of characters or traits from the parents to their off springs is called heredity. b) Variations :- The differences between the characters or traits among the individuals of the same species are called variations.

EVOLUTION, HEREDITY, AND BEHAVIOR - . to man. from monkey. darwin and evolution. biological evolution- changes that take

Ch. 22 Heredity and Evolution - . objectives: to describe the role of dna in heredity to compare mitosis and meiosis to

Unit 3 – Evolution, Heredity and Genetics - . read the “cells that reproduce” article and answer the questions with

Chapter 5: Heredity - . http://www.youtube.com/watch?v=6opjno9w_rq. chapter 5 – heredity an organism is a collection of