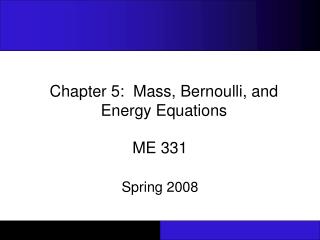 Chapter 5: Mass, Bernoulli, and Energy Equations. ME 331 Spring 2008. Introduction. This chapter deals with 3 equations commonly used in fluid mechanics The mass equation is an expression of the conservation of mass principle.

Systems of Equations and Matrices - . chapter 5. 5.1 systems of equations in two variables. solve a system of two linear

Chapter 5 - . quadratic equations and functions. in this chapter you will …. learn to use quadratic functions to model