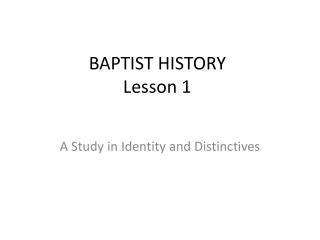 A History Lesson! - . palm sunday easter - passover. triumph to tragedy and back. luke

INTRODUCTION TO BAPTIST HISTORY - . what is the big deal? what makes us different?. from pastor jim alter’s book “why

BAPTIST HISTORY Lesson 27 - . formation of the southern baptist convention. the work of the triennial convention (formed

Baptist History Lesson 33 - . a survey of calvinistic baptist history from 1950 forward. we’re not the only baptists

Mini History Lesson - . a few decades ago counselors were introduced into schools to assist students with

LESSON 1 HISTORY OF GYPSIES AND TRAVELLERS - . who are the travellers?. there are several main groups of travellers in

Baptist History Lesson 31 - . baptists in the north. rise of modernism-liberalism. “a movement who’s adherents were

History Lesson - . by: natalie faith. look at the wordle , and write down some ideas that come to mind!. from your notes

BAPTIST - Distinctly. baptist. priesthood of the believer. we are filled with the spirit and are god’s house. 1

BAPTIST - Distinctly. baptist. what makes baptists different from other denominations? baptists are not the one true

Baptist - . by: madi o strica and claire post. what is a baptist?. a baptist is someone who has a strong belief that the

Baptist History - . it tackles with the historical study of the baptist movement from the apostolic era up to the present

BAPTIST - Distinctly. baptist. baptism &amp; communion. what is the purpose of baptism? why do we do it? is it

Baptist History Lesson 19 - . baptist beginnings in america, pt. 2 “but he who endures to the end will be saved”.

Baptist - Methodist. baptist. catholic. why?. lutheran. church of god. nazarene. why we believe denominations are wrong.